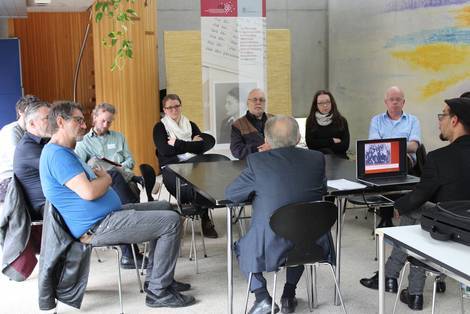 What happened to the people who survived forced labor, deportation, and the concentration camps? And what challenges were faced by liberated adolescents and children? In recent years there has been growing interest in researching the situation of displaced persons (DPs) after 1945. At the end of May 2016, an international workshop on this topic was held in Dachau with the title of “Life in the Aftermath – Displaced Persons, Displaced Children and Child Survivors on the Move: New approaches in education and research.” The workshop was organized by the ITS and the Max Mannheimer Study Center. It was accompanied by the ITS exhibition entitled “Where should we have gone after the liberation?”

Historian Boaz Cohen, Head of Holocaust Studies at Western Galilee College in Akko, Israel, emphasized that postwar history remains incomplete if we do not take displaced children into account, particularly considering how important this generation still is today.  The files of the Child Search Branch in the ITS archive, which have not yet been thoroughly researched, are an important starting point.

US historian Atina Grossmann drew attention to the fact that only a few years after Nazi Germany had been declared “free of Jews,” some 300,000 Jewish people, primarily from Eastern Europe, were living in Germany and several of its neighboring countries. Although the Jewish DPs and the German population resided in the same country, they lived in different worlds and were fundamentally separated by their experiences of the war.

The pedagogical sections of the workshop focused on DPs as a topic in education, with some references being made to the current dimension of “displacement” in light of the refugee situation in Europe. Scholars from seven countries also presented their research projects, which covered the consequences for the children and adolescents as well as research into professional aid structures.

The conference was very enriching for our work. It advanced public discourse on the issue and spawned several new project ideas.